Before you develop, you have to explore… but where do you start?

As an explorer and developer of geothermal power plants, the first questions we ask ourselves are:
– What: What geothermal system concept are we looking for? For what purpose?
– Where”: In which area should we start exploring?
– How? “What measuring instruments and tools are available to us to gather information?

There is no right or wrong answer! In this area there are many targets worth exploring:
1) we are on the lithospheric fault of the Sillon Houiller, some Oligocene basins and Miocene volcanic edifices reveal the most recent rejeux. A thermal flux of 128 mW/m² underlines the interest of this structure. The concept is that of crustal faults.

2) In the Gelles granite, the promoters of the Hot Dry Rock concept could have tried to deploy heat extraction methods (as was the case at Mayet de Montagne) with, for example, EAVOR-type radiator methods. To be continued.

4) On the Puys chain (with trachytes aged between 15 and 9000 years), a drilling at the Montmeyre basin, located at the foot of the Puy de Dôme, was attempted in the 1970s, without success. In exploration, natural systems are rarely trivial and all aspects of a geothermal system must be considered (heat + fluids and reservoir-drains). Drilling at the foot of volcanoes is not enough!

5) On the Limagne fault, near the thermo-mineral springs of Royat! This area is covered by a (competing) PER. The area is very interesting.

6) In the heart of the Mont Dores caldera, with numerous springs and thermal spas. This area is very interesting geologically and is facing the defiance of the thermalists! A competing permit for the area was finally abandoned.

7) In the Saint Gervais granite, on the Pontgibaud fault zone.

3) Here is the zone we have chosen at the intersection between the NS fault zone of Pontgibaud which plunges under the chain of puys and the NE-SW fault zone of Aigueperse. 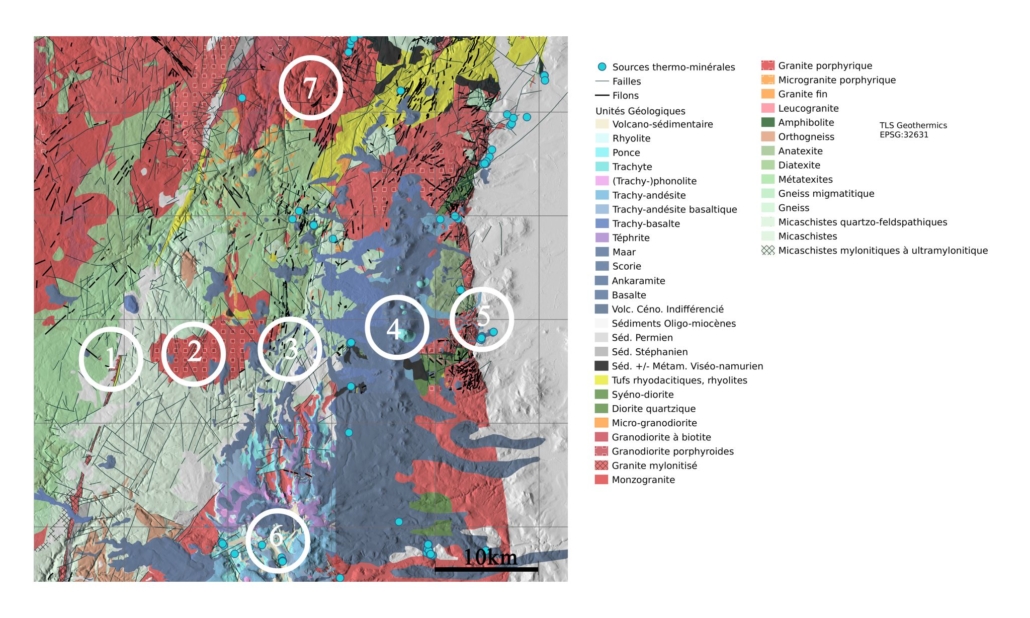