Let’s address today the question of the load factor of the power generators.

Indeed, the installed power does not reflect at all the quantity of energy produced!
Thus 1 MWe of installed wind power produces on average 3x less energy than 1 MWe of nuclear power.

To illustrate this point we used Robin Girard’s data as well as IEA’s assessments for the years 2017 and 2018 (links available in commentary).

Both data sources are consistent (except for geothermal which is poorly documented in Girard’s data).

👉 Geothermal produces as much as nuclear per MW installed worldwide!

There is also a great variability between countries for the same technology! The reasons are various (technological, climatic, political, degrees of maintenance…).

👉 The type of geothermal power plants developed by TLS Geothermics would be able to provide 8 GWh of electricity per year and per MWe installed (compared to 6.5 GWh on average worldwide)!

This notion is very important, because it considerably changes the amount of material needed to produce 1 kWh of energy!
It is notably this load factor that explains why the energy transition requires so much metal!

💡 What really counts is the amount of energy produced per MW installed! And for that, geothermal energy does as well as nuclear! 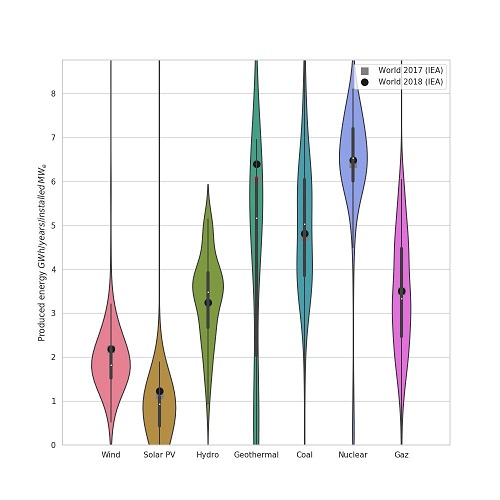